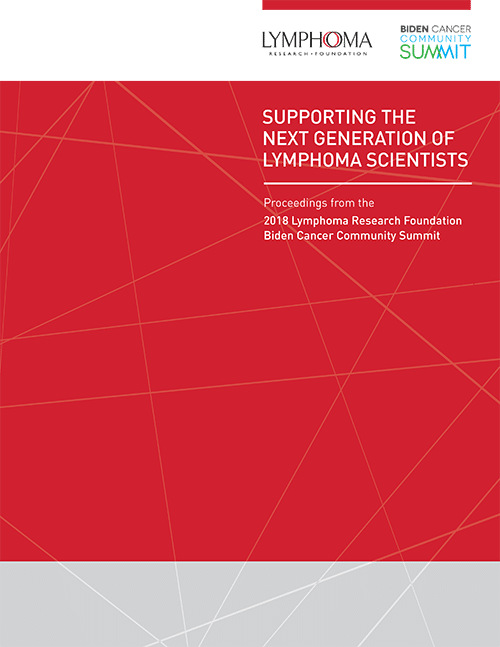 Learn more about the findings of the panel from LRF’s monograph, Supporting the Next Generation of Lymphoma Scientists

In the face of declining federal and institutional resources, the Lymphoma Research Foundation’s (LRF) commitment to supporting early career lymphoma researchers has become more critical than ever before. To explore this important topic, the Foundation convened a Biden Cancer Community Summit on September 21, 2018, inviting an expert panel to discuss the challenges faced by the lymphoma community and the ways in which the Lymphoma Research Foundation can support the next generation of lymphoma scientists. Today, the Foundation announced the release of a monograph highlighting the findings of the panel at the summit: Supporting the Next Generation of Lymphoma Scientists.

The Summit panel was co-chaired by Dr. Andrew Zelenetz of Memorial Sloan Kettering Cancer Center, who is the Chair-Elect of the Foundation’s Scientific Advisory Board (SAB), and LRF Chief Executive Officer Meghan Gutierrez. “We are grateful to the expert panel for their testimony and willingness to take part in the Summit,” said Dr. Zelenetz. “Motivated by our shared mission to eradicate lymphoma and serve those touched by this disease, we look forward to pursuing the recommendations highlighted in this monograph.”

Chief among the recommendations highlighted in the paper is increased overall funding for an expansion of early career investigator programs, including broadening funding to include mid-career investigators. At current funding levels, only a small number of the highest quality applicants receive grants, meaning that individuals with the potential to make significant impact in the field of disease-specific research may fall away from the field due to insufficient support and direction. In addition, the high risk-high reward science which is the hallmark of translational research is almost never funded by corporations and most often pursued by early career scientists, proving difficult – if not impossible – to pursue mid-career or later.

The development of programs that focus on creating a more public-facing role for researchers, facilitating access to biomedical grant opportunities, and increasing engagement of the public in the design of clinical trials are among the new concepts explored. The importance of mentorship and value of formal scientific mentoring programs, which encourage skill development, help solidify disease-specific project goals, and impact the direction of a scientist’s research for the rest of their career, are also highlighted in the monograph.

“The goal of the Biden Cancer Summit program was to show progress from partners and to engage communities to tell us what issues most plague them, and to bring all resources possible to the fight to identify issues and solutions that matter locally and nationally,” said Vice President Joe Biden. “We are at an inflection point in the understanding and treatment of cancer and are starting to break down barriers and change the culture in ways that are needed to deliver what patients deserve – a cancer research and care system that puts saving lives above all else. The Lymphoma Research Foundation’s commitment bring us closer to developing the right systems and the right culture to get us there.”

“The Lymphoma Research Foundation’s Summit highlighted the way in which early career investigator programs are critical to advancing scientific discovery,” said Foundation Chief Executive Officer Meghan Gutierrez. “Noting the pace with which biomedical research and new lymphoma and CLL treatments continue to evolve, innovative programming and adequate resources are required to adequately train the next generation of scientists.”

To learn more about the findings of the panel at the summit please read LRF’s monograph, Supporting the Next Generation of Lymphoma Scientists. 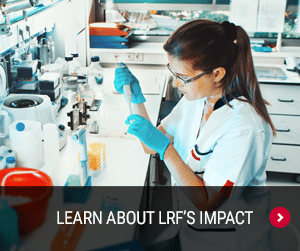