Diffuse large B-cell lymphoma (DLBCL) is the most common type of non-Hodgkin lymphoma (NHL), accounting for up to one-third of patients with newly diagnosed NHL in the United States. DLBCL is a fast growing or aggressive type of lymphoma.  As our knowledge of the biology of the disease increases, a number of DLBCLs have been further categorized into several subtypes which differ with respect to certain characteristics and genetic expressions.  As a result, a doctor may request certain genomic tests to help him or her understand the specific genetics and subtyping of the patient’s DLBCL.  This can help not only determine prognosis, but also response to certain therapies. 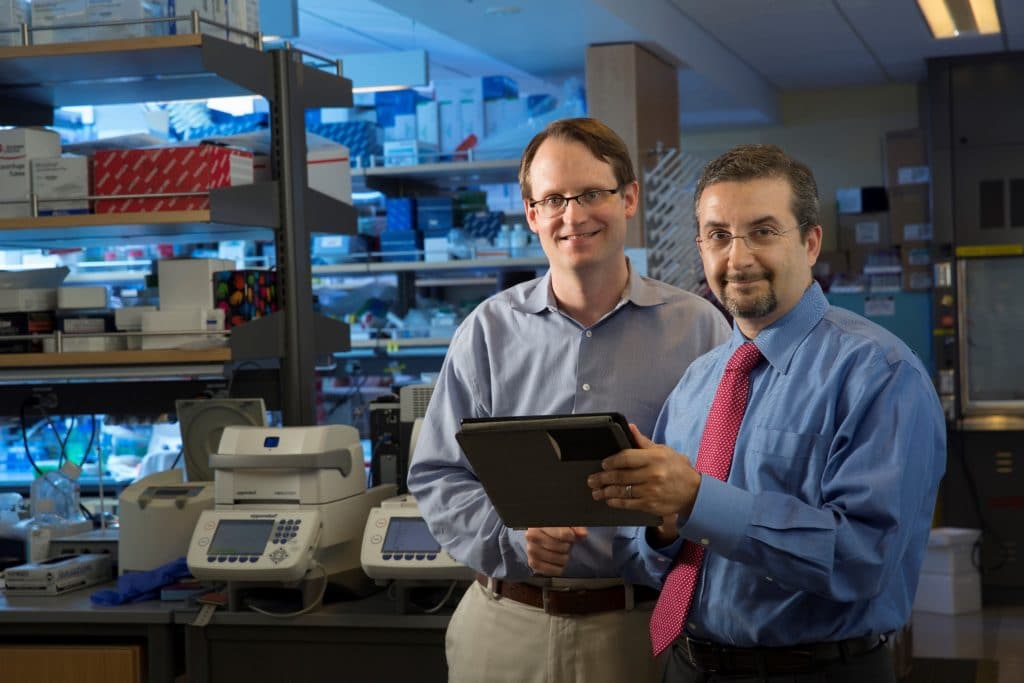 A study published in the Nov. 9, 2016 issue of Science Translational Medicine and led by several Lymphoma Research Foundation (LRF) Scientific Advisory Board (SAB) members and LRF Grantees, demonstrates circulating tumor DNA (ctDNA) can reveal these distinct genetic subtypes of lymphoma, without the need for invasive procedures like a tumor biopsy. By profiling circulating tumor DNA, this study demonstrates the ability to both distinguish molecular subtypes of DLBCL, as well as track clonal evolution of follicular lymphoma (FL, a low grade lymphoma) into DLBCL (a high grade lymphoma).  Clonal evolution is when tumors cells that initially have one abnormal mutation acquire additional mutations, forming a mass of genetically and biologically varied cancer cells.

The study, conducted at the Stanford University School of Medicine, demonstrated many firsts in the field of genomic testing. Patients with DLBCL have tumors that display a wide range of biology, but these tumors can generally be placed into two broad categories based on their molecular subtypes – Germinal Center-like B cell (GCB) or non-Germinal Center-like B cell (Non-GCB). These molecular subtypes have significant prognostic implications, and therefore are important to identify for the treatment of patients. However, previous methods for identification of GCB vs non-GCB subtypes of DLBCL have been difficult to apply in the clinic due to the need for fresh tumor samples. This study demonstrated for the first time the ability to distinguish GCB and non-GCB DLBCL directly from DNA sequencing from the blood plasma, without the need for a tumor sample. This is especially important in light of recent studies showing how various lymphoma therapies have different outcomes based on DLBCL subtypes.

Similarly, patients with transformed FL exhibit significantly different clonal evolutionary pattern over time than patients with non-transformed FL or patients with relapsed/refractory DLBCL.  This observation enables insights into the biology of the transition from an indolent to an aggressive lymphoma.  These patterns can be captured in plasma samples which bypasses the required invasive (i.e. tumor biopsy) diagnosis of transformation. The study further illustrates that ctDNA captures relevant clonal evolution that is missed by single biopsies in a large number of DLBCL patients.  This represents a key finding in DLBCL that challenges the current method of characterizing patients—which may result in better therapeutic outcomes.

The potential impact on patients is varied and promising.  First, this could lead to limiting the number of invasive biopsies needed to make a lymphoma diagnosis; ctDNA could also be used to correlate with burden of disease and therefore be used as a prognostic indicator; minimal residual disease (MRD) could also be detected as much as six months earlier than with standard imaging.  Finally, continued exploration into whether treatment resistance, particularly to ibrutinib and idelalisb,  could potentially be determined by markers within a few weeks, enabling doctors to better determine the most effective course of treatment for a given patient.

To read more about this study, visit the Science Translational Medicine website.