The Ripple Effect in Lymphoma Research 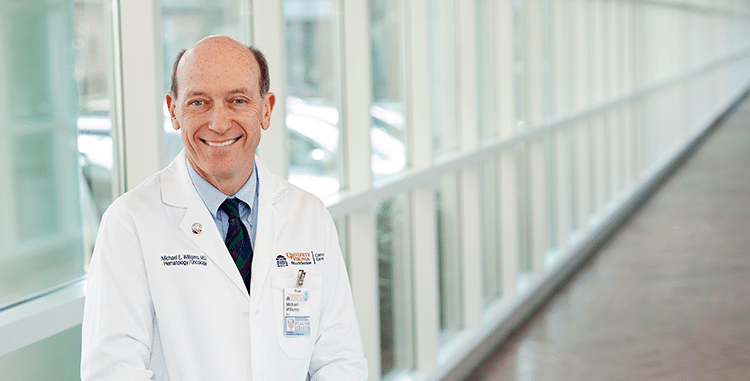 Lymphoma Research Foundation (LRF) grantee and Scientific Advisory Board (SAB) member Michael Williams, MD, of the University of Virginia School of Medicine, sees lymphoma research as having a ripple effect. Like ripples expanding across the water when an object is dropped into it, being a lymphoma researcher has a much larger impact on the lives of those touched by this disease than the sum of their individual research and improving patient outcomes.

“Every intention sets energy in motion, whether you are conscious of it or not,” says author Gary Zukav. Dr. Williams feels similarly about his role as a lymphoma clinician and researcher and the effect healthcare professionals have on accelerating cures.

After completing his undergraduate degree at his home state school of the Ohio State University, Dr. Williams received a Master of Science from the Harvard T.H. Chan School of Public Health. During graduate school, he pursued research in immunology and was surrounded by several physicians as classmates. It was then that he became inspired to obtain a career in the medical field. Dr. Williams attended the University of Cincinnati College of Medicine and completed his residency and fellowship at UVA Health in Charlottesville, Virginia. “During medical school, I planned to become an infectious disease specialist, but once I started my training, I did several rotations on our hematology/ oncology services, taking care of acute leukemia and lymphoma patients, and felt drawn towards this field,” says Dr. Williams.
At the onset of Dr. Williams’s career, his lab pursued genetic analyses of clonality and chromosomal translocations in lymphomas. He quickly became fascinated by the clinical links in lymphoma and chronic lymphocytic leukemia (CLL) that he could discover in the lab. Collaborating with hematopathologist Dr. Steven Swerdlow at the University of Pittsburgh, Dr. Williams found a connection between mantle cell lymphoma (MCL) and a molecular translocation between chromosomes 11 and 14. Their further work led to confirmation that the relevant gene, later called cyclin D1 (a regulator of cell cycle progression), was activated in almost all MCL and has become a standard test to diagnose MCL.

“What has been especially exciting in recent years is that we’ve learned how to extend those responses using several treatment modalities.
While MCL is usually difficult to control long-term with traditional chemotherapy, it is very susceptible to several specific targeted agents, which has greatly expanded the treatment landscape.”

While Dr. Williams began his career treating patients with a broad spectrum of hematological malignancies, he has spent the last 20 years focused on B-cell lymphomas and CLL. This unique interest was sparked by his involvement with an early pivotal clinical trial examining the use of rituximab to treat certain types of lymphomas — a drug that has since become a standard in treatment of most B-cell malignancies. “That was around the time I was starting to transition from the lab to clinical and translational research,” recalls Dr. Williams. “Being able to see a drug improve the way we treated patients who previously had a very poor prognosis made me passionate to focus on these subtypes of lymphoma,” he says.

Dr. Williams remains intrigued by the complexity of B-cell lymphomas such as MCL and motivated to improve outcomes for patients diagnosed with this disease. “While many MCL patients achieved a good initial response to traditional treatment regimens, most relapsed within two or three years, after which it became harder and harder to get their disease under control,” says Dr. Williams. “What has been exciting in recent years is that we’ve learned to maintain those responses and induce second and third remissions with specific targeted agents and immunotherapeutics.” “What has been especially exciting in recent years is that we’ve learned how to extend those responses using several treatment modalities. While MCL is usually difficult to control long-term with traditional chemotherapy, it is very susceptible to several specific targeted agents, which has greatly expanded the treatment landscape.”

With an increasing number of novel therapeutics becoming available for lymphoma patients, Dr. Williams is excited by the ability to offer his patients, with particularly complex cases, hope for the future. “We have many treatments now that are FDA approved with many more in the pipeline, that not so long ago would not have been imagined,” he says. “If that doesn’t make you excited about going to work and seeing patients, collaborating with colleagues across many academic centers and the LRF, then you are probably in the wrong field.”

Furthering his impact in MCL research and patient care, Dr. Williams became involved with LRF’s Mantle Cell Lymphoma Initiative. He became a member and founding Chair of the MCL Consortium (MCLC), which was established in 2005 to help accelerate developments in the understanding and treatment of MCL by convening leaders in the field.

“LRF began awarding MCL-specific research grants — I applied for one and received funding to support work that I was doing within the disease,” says Dr. Williams. He was integral in leading the consortium and has since played a pivotal role in the continued development of the initiative. “Many advances in the field of mantle cell lymphoma have arisen from LRF’s presence in this area and their ability to catalyze important work that has the greatest potential to create an impact on this disease,” he says. In recognition of Dr. Williams’s outstanding contributions to help advance the understanding of MCL and its treatment, the LRF is awarding him its first-ever Mantle Cell Lymphoma Leadership Award.

“The ripples that the LRF created in advancing progress in lymphoma and CLL continue to grow via basic and translational research, patient education and by supporting the next generation of lymphoma investigators and clinicians.”

Dr. Williams also serves as a member of LRF’s Scientific Advisory Board (SAB) and feels privileged to work with colleagues in the field who are helping to advance lymphoma care and understanding of the disease. “The LRF has supported and encouraged many bright young scientists and clinicians to pursue careers in lymphoma who otherwise may not have chosen this field,” says Dr. Williams. “The ripples that the LRF created in advancing progress in lymphoma and CLL continue to grow via basic and translational research, patient education and by supporting the next generation of lymphoma investigators and clinicians.”

With each advance, Dr. Williams is filled with optimism and curiosity — recognizing that new treatment regimens open the door to both opportunity and room for further improvement. “It’s not like, ‘well now we’ve got a new drug, and we’re done,’ because these drugs are still not curative and not everybody responds, so questions continually arise as to how we can improve these therapies to be more useful for more patients,” says Dr. Williams.

“ We have so many treatments available now that are FDA approved, that at one time could not have even been dreamed of, which just shows how exciting the field can be.”

He says that answering these questions requires collaboration amongst basic, translational and clinical investigators. Dr. Williams believes progress in cancer, and more specifically lymphoma, derives from a deep understanding of basic science, allowing translational researchers to develop appropriate and targeted drugs. “A simple example is that many B-cell lymphomas are driven by abnormalities in gene expression and function in cell signaling pathways. It’s a bench researcher’s job to say ‘if that pathway is turned on, what happens if you turn it off? Can we identify a molecule to do that, and in turn create a therapeutic?’,” says Dr. Williams. “The clinical researchers then take on the design of early-phase clinical trials, by which you can safely test in patients to determine whether it ultimately can become a new treatment option.”

Although Dr. Williams and all lymphoma investigators are continuously thinking of the next questions that need to be answered, he also feels that the progress made over the last 20 years in lymphoma is nothing short of remarkable. “I think that these advances are among the best stories in all of medicine, not just cancer care, but I think across the entire spectrum of medicine,” he says. “There is very little that’s been as dramatic as the progress in lymphoma and CLL.” 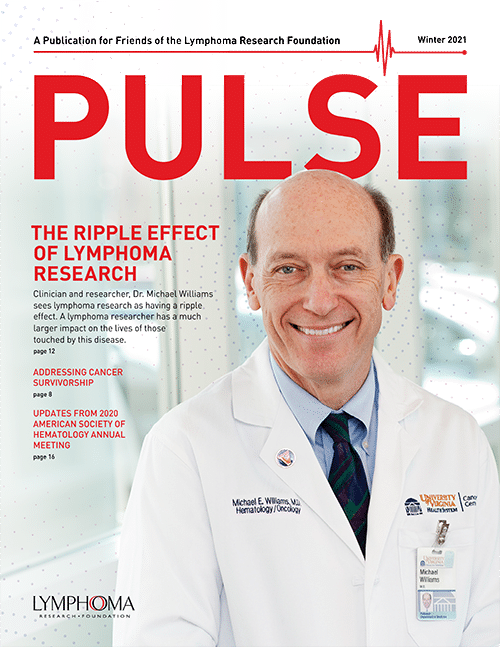