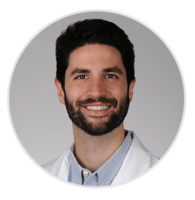 A common treatment for relapsed or refractory diffuse large B-cell lymphoma (DLBCL) is salvage chemotherapy followed by an autologous stem cell transplant (a transplant of a patient’s own healthy cells). Though this treatment can lead to a cure, only a small proportion of these patients achieve this. Dr. Hess’s LCRMP project adds novel therapeutic CC-486 (an oral version of the targeted agent azacitidine) to salvage chemotherapy in order to increase the chemotherapy sensitive of DLBCL, thus hopefully improving
the rate of complete remission and subsequent cure.

After receiving his MD from the University of Missouri, Dr. Hess first became interested in malignant hematology as a resident at Loyola University Medical Center (Illinois), and narrowed his focus to lymphoma while working with Nancy Bartlett, MD (a LRF Scientific Advisory Board member) at Washington University in St. Louis during his fellowship. “During fellowship, the more experience I had with lymphoma, the more I was able to see the diversity of and nuance within each lymphoma subtype,” Dr. Hess says, “I also found the research to be the most dynamic in the field of oncology and became involved in translational projects with my mentors, showing me first hand how interesting therapies can move from the bench to bedside.”

Dr. Hess is currently Assistant Professor of Hematology and Oncology at the Medical University of South Carolina, where he is also the Hollings Cancer Center CAR-T Cell Adult Clinical Director and the Lymphoma Clinical Director. Noting that in his roles at MUSC he is attempting to establish the institution as a national presence in lymphoma, Dr. Hess is “very excited” to be a part of the LCRMP and establish collaborations both with his peers in the program and the LCRMP faculty. “I look forward to meeting so many experts in the field and not only collaborating with them during the Workshop by for many years to come.”