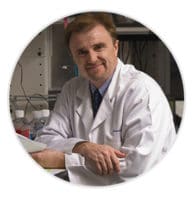 Lymphoma Research Foundation (LRF) grantee Dr. Laurence Cooper is passionate about using the body’s immune system to fight lymphoma. He helped conduct the first in-human clinical trial of adoptive immunotherapy for patients who are not responding to treatment using funding from his 2006 LRF Follicular Lymphoma Clinical Studies Award. Now the MD Anderson associate professor and researcher is embarking on another clinical trial using new biology to genetically modify lymphoma patients’ immune systems and potentially diminish the obstacles to implementing this therapy for lymphoma.

“Lymphoma comes in a variety of flavors and it’s very difficult to develop a one-size-fits-all treatment,” said Dr. Cooper. “I’m drawn with a sense of empathy and a sense of action that something needs to be done. We can’t rely on yesterday’s therapy as patients are faced with toxicity of current treatment and death when therapy fails. Some of the drugs we rely upon are a decade or more old. Where are the new therapies coming from?”

Dr. Cooper and his team are interested in using adoptive immunotherapy, which involves harvesting and genetically modifying a lymphoma patient’s white blood cells, or T-cells, to tailor treatments to eliminate their disease. Working with collaborators who studied the genetics of fish, Dr. Cooper has developed the first in-human approach to using fish DNA sequences to reprogram human T-cells to render them specific for lymphoma cells. To grow these genetically modified T-cells to large numbers suitable for a clinical trial, Dr. Cooper has collaborated to produce what are called nurse cells. He intends to use the nurse cells as a substrate upon which to grow the modified T-cells. He believes this research will be a first step in reducing the hurdles for others to use this type of treatment.

“After we have genetically modified the T-cells we add them to the nurse cells and come back a few weeks later,” Dr. Cooper said. “At this point, we have generated a large population of genetically modified cells that have the ability to go after and eliminate lymphoma cells. We want people to see gene therapy not as a boutique endeavor only performed in the most sophisticated labs and at a high price, but as an approach to developing novel therapies that can be undertaken by multiple investigators to the benefit of patients with lymphoma.”

Dr. Cooper and his team will be enrolling their first patients for this trial before the end of the year. They will be studying patients with advanced B-cell non-Hodgkin lymphoma who have aggressive malignancies and who are likely to relapse despite receiving a hematopoietic stem-cell transplantation. “Our approach to the genetic modification and expansion of human T-cells will be tested to see if we can impact the pace of disease,” Dr. Cooper said.

Since this is the first trial of its kind and the field has expressed great interest in this research, Dr. Cooper will be primarily focused on “safety and feasibility.” Results of this study will come slowly because Dr. Cooper must proceed cautiously over a couple of years. He is looking to determine whether or not the modified T-cells will survive in the patients, as the longer they survive the longer they have to kill a tumor. Reflecting on the opportunities made available to him through his LRF grant, Dr. Cooper is grateful for the support and guidance especially in troubling economic times. Claiming to see an “average five-to-one return on investment from private funding,” he said he has been able to leverage his LRF award to further his research even more. “LRF is terrific and not only as a fundraising mechanism. They stand by me, the investigator,” he said. “LRF is really invested in me and takes the time to help my research work. They have a sense of risk tolerance and optimism. This foundation is exactly what you want especially in a time of shrinking federal support.”

A member of the MCLC since 2006, Dr. Cooper also welcomes the annual MCL Scientific Workshops as a chance to collaborate and learn. “Getting people in the room to put down their Blackberries and focus is always welcome. LRF helps to mediate those scientific interactions.” When asked for the most important piece of advice he would give to a newly diagnosed lymphoma patient, Dr. Cooper said it is all about finding the right physician. “Find an oncologist you trust and who works at a major medical center. Because if things go well, terrific, but realistically nothing ever goes well. Even if the tumor goes away, there’s always something else going on – financial, emotional. The family needs an oncologist that they can talk to and trust. Be prepared to talk with him or her about all your issues above and beyond cancer.”