A father and daughter’s story as both lymphoma survivors and each other’s caregivers, and their mission to empower themselves through education and connect with others at Lymphoma Research Foundation (LRF)’s North American Educational Forum on Lymphoma. 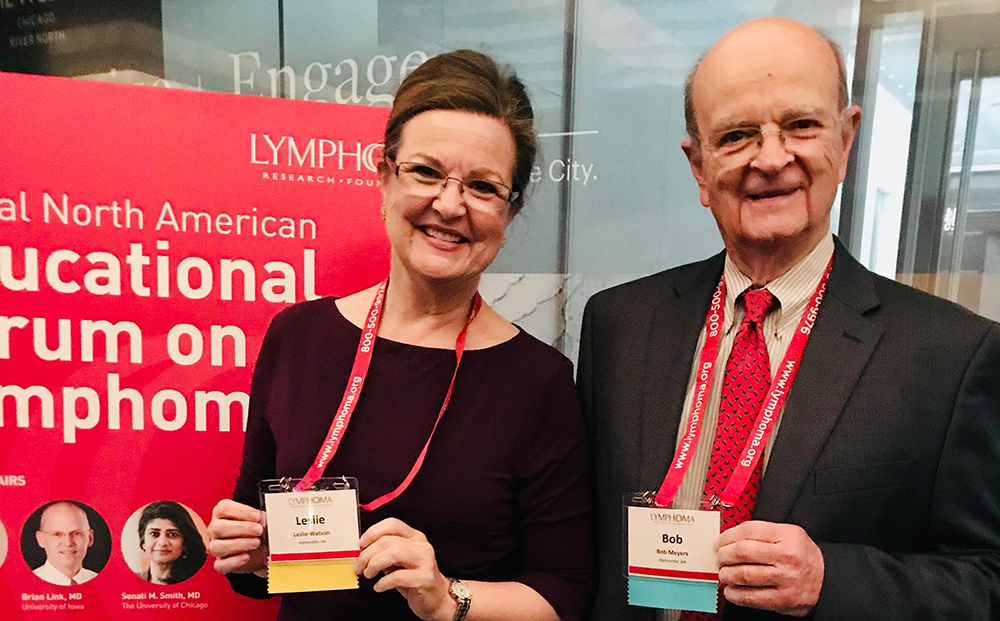 Bob Meyers and his daughter Leslie Watson have always been close. In fact, they live right down the street from one another in their Georgia neighborhood. So, when Watson received the diagnosis of clear cell carcinoma in the summer of 1996, and then follicular lymphoma (FL) later that fall, Meyers was there by her side as her devoted caregiver. “We were totally swept up with emotion. At the time, the prognosis for follicular lymphoma was not like it is today,” says Meyers.“I was determined to learn as much as I could about the disease and be her advocate.”

Follicular lymphoma is an indolent (slow-growing) form of B-cell non-Hodgkin lymphoma (NHL) and accounts for 20 to 30 percent of all NHL cases. Common symptoms of FL include enlargement of the lymph nodes in the neck, underarms, abdomen or groin, fatigue, shortness of breath, night sweats and weight loss. Sometimes, patients with FL have no apparent symptoms of the disease at diagnosis. Follicular lymphoma is usually not considered curable, but more of a chronic disease, and patients can live for many years with this form of lymphoma.

“We were totally swept up with emotion. At the time, the prognosis for follicular lymphoma was not like it is today. I was determined to learn as much as I could about the disease and be her [Leslie’s] advocate.”

Watson was only 30 years old and ready to start her life as a new bride before her first diagnosis. A diagnosis of two cancers was unexpected — especially follicular lymphoma — a cancer she never heard of before. She and Meyers immediately went to work looking for oncologists to discuss treatment options. “The first oncologist we spoke with wanted to treat it very aggressively with FND (fludarabine, mitoxantrone, dexamethasone). This was before rituximab (Rituxan) was widely prescribed,” says Watson. “After just receiving a hysterectomy to treat my clear cell carcinoma, we wanted to speak with other oncologists to get an idea of other options. That’s when we learned of watch and wait.”

Watch and wait (also known as active surveillance, or watchful waiting) is often recommended for selected patients with indolent lymphomas. This approach may be started after the initial diagnosis or following relapse, depending on individual circumstances. Active treatment is started if the patient begins to develop lymphoma-related symptoms or there are signs that the disease is progressing based on testing during follow-up visits.

After much research provided by her father and two second opinions, Watson decided the best option was watch and wait, where she received CT and PET scans every 6 months. “We wanted to learn as much as we could about the disease to make the best-informed decision for Leslie,” says Meyers. “I started to look up doctors and researchers on the internet and just started cold-calling them. Many of them were happy to speak to me. In particular, researchers were rather flattered that I wanted to talk with them about their research!”

During his research, Meyers found out about the Lymphoma Research Foundation’s inaugural North American Educational Forum on Lymphoma and recommended that he and Watson attend. “When we attended the Ed Forum, we were just blown away,” recalls Watson. “Here we are in a room with 600 or so people — lymphoma patients, survivors and their caregivers — full of hope, intellectual curiosity, and taking charge of their disease. It was a truly remarkable experience.”

For Watson, attending the Ed Forum was her first time connecting with other lymphoma patients and survivors, and sharing her lymphoma journey with others outside her family. “I was a fiercely private person at the time. But here I am among survivors, attending amazing lectures, speaking informally with leading doctors and feeling so supported. Knowledge replaced fear of the unknown.”

After Watson’s initial diagnosis in 1996 and the decision to watch and wait, she has undergone three treatments for her FL. Her first and second treatments were with rituximab in 2002 and 2008, and then five weeks of pencil beam proton radiation in 2015, which was only approved for pediatric brain tumors and testicular and prostate cancer. “Although pencil beam radiation was not approved for lymphoma at the time, we learned that it was a highly accurate form of radiation therapy with less radiation scatter,” says Watson. “Because only one of my lymph nodes was affected, and we learned that rituximab loses its efficacy the more one uses it. We felt that pencil beam would be the best option for me, and we’re glad we did it.”

For several years, Watson’s lymph nodes continued to shrink until 2019, when she received the news that there was no measurable evidence of disease. This was the first time she heard that in her 22 years with FL.  Throughout this time, Meyers and Watson continued to attend the LRF Ed Forum to stay up-to-date on the latest treatments for follicular lymphoma and to network with others in the community — having attended more than a dozen since the inaugural Forum in 1996. “Every year, we learn something new, and we continue to meet people who are surviving and thriving for years with this disease. It’s been amazing, and it’s thanks to my dad and his research for finding LRF and their amazing resources.”

AN UNEXPECTED TURN OF EVENTS

After a routine annual physical in October 2019, Meyers received a call from his physician’s office that his blood work showed something was amiss and recommended he visit an oncologist. After additional tests, he received the diagnosis of chronic lymphocytic leukemia (CLL). “My experience with Leslie over the years prepared me not to be shocked when bad news comes,” says Meyers. “I just knew this is a new disease we had to learn. The LRF Ed Forum was two weeks after my diagnosis of CLL. Leslie and I went to the Forum for me this time.”

Chronic lymphocytic leukemia and small lymphocytic lymphoma (SLL) are forms of NHL that arise from B lymphocytes. CLL and SLL are essentially the same diseases, with the only difference being the location where the cancer primarily occurs. When most of the cancer cells are located in the bloodstream and the bone marrow, the disease is referred to as CLL, although lymph nodes and the spleen are often involved.

The outlook for patients with CLL/SLL has improved in recent years, but the disease course still varies widely. Many patients with CLL do not require treatment at diagnosis and perhaps for months to years after that.

Meyers’s and Watson’s roles were now reversed, with Watson being the caregiver and Meyers, the patient. Although they’d attended many Ed Forums by the time of Meyers’s diagnosis, they didn’t know much about CLL. “We went to learn about a new disease. We started from ground zero, like many of the lymphoma patients we have met year after year,” says Meyers.

After attending the Ed Forum in 2019, speaking with other CLL survivors and doctors, and conversations with Meyers’s oncologist, they have decided on watch and wait. “We came home full of knowledge, ideas and hope,” says Meyers. “The LRF staff is competent, caring and totally committed. The give and take among patients and close interactions with outstanding doctors are so important. To add the fact that the Forums are held in genuinely nice locations with top-notch accommodations and service helps make each conference a special, uplifting and memorable experience.”

Although the 25th Annual Ed Forum will be held virtually this year due to precautions amid COVID-19, Meyers and Watson are still looking forward to attending and learning what is new in treatment and research for FL and CLL.

“There is always something new to learn. There is always a story you can connect with. There is always a new doctor you get a chance to speak with,” says Meyers. “LRF is truly a unique organization that has helped thousands of people through education, human interaction and understanding. They have given hope and solace to so many in times of great need, including Leslie and me. 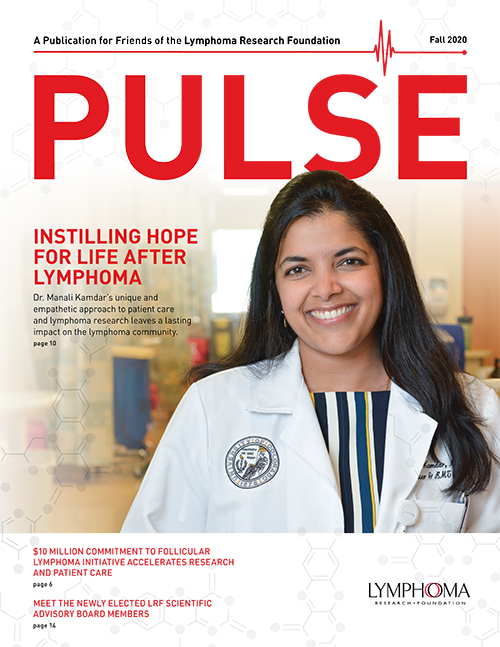